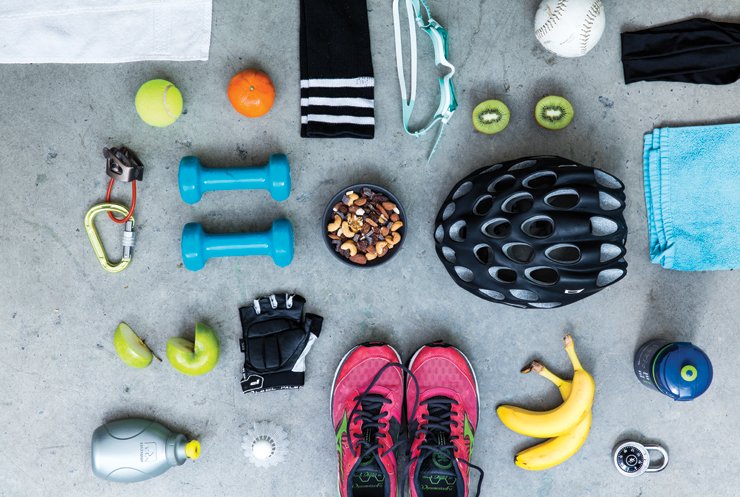 For some people, adopting healthy habits and training like an athlete can seem like an insurmountable challenge. Catherine Naulleau, sports and performance nutritionist for the Canadian Olympic Committee, thinks that you just need to pay attention to what you eat to maintain optimal health and stay energized throughout the day. Here, she gives us a glimpse at the diets of high-level athletes. | By Charline-Ève Pilon

Catherine Naulleau has been working with Canadian athletes for over ten years. Her role with the Olympic Committee is to provide nutritional support for athletes and coaches and prepare the nutritional aspect of the Games. She is thus involved at various levels of performance, especially on the medical side, as she works very closely with the team’s doctors. She also takes care of logistics for the lounges for athletes and staff and prepares the cargo accordingly.

I have to know the Games’ cafeteria, the menu and food at the competition sites,” she says. “It takes two years of preparation, getting in touch with the different sports and the nutritionists who work with athletes so that I can get to know their needs. Many athletes have serious allergies, which I need to know about ahead of time

Rubbing shoulders with the athletic elite

As part of her job, Naulleau plans the diet of the athletes she works with according to the sport they practice, when they train, and their goals, whether they want to lose weight, gain lean body mass or stay where they’re at. She looks at the calendar of competitions and plans the necessary follow-ups.

The competition aspect is very different from the training aspect, she explains: “It involves travelling, sleep and a diet that will be very different. Basically, we try to do several trial runs before the competitions begin to make sure it goes well. It’s also important for athletes to bring lots of food that reminds them of home and will have a positive impact on their performance. Too many athletes go to Europe or Asia without proper planning. Dry fish and rice for breakfast isn’t everyone’s thing!”

The most important thing when she builds an athlete’s diet plan is that person’s preferences. She has to know what the athlete likes to eat and not impose anything new at first because they won’t follow recommendations. “You also have to explain that we’re not the police, but collaborators who can help optimize their performance. In nutrition and in sport, there’s always room for improvement! We have to do constant basic education even with top medallists.”

An athlete’s diet at home

There are many physiological differences between a person who works out regularly, but lightly, and an athlete. Especially when it comes to the amount of energy burned and calorie requirements.

“A high-level athlete will burn a lot of energy and will have a body composition with little fat and more lean body mass. They also work out so much that they burn fat at a higher rate than people who aren’t as fit. For the same effort, someone who swims for an hour will burn more glycogen (carbohydrate reserves stored in your muscles) and will be much more tired than an elite athlete who also swims for an hour, who will burn more fat than glycogen and find the workout very easy.”

Although athletes follow a precise diet calculated to their needs, Naulleau believes that everyone can get maximum energy on a daily basis if they follow a few ground rules. “You should never neglect the three meals a day, especially lunch. You can get away with a very small or very late breakfast. But if you skip lunch, you’re done for!”

Also, according to her, an optimal meal should always combine protein and carbs. For example, in the morning: toast, almond butter, banana, orange juice, coffee; or oatmeal with berries, milk, maple syrup, almond or peanut butter and a hardboiled egg. “For snacks, you should also opt for a combination of carbs and protein. The goal is to never get to lunch completely famished, which too many people still do: almonds and fruit, Greek yogurt and grapes, apple and cheese, etc.”

For lunch, you should never neglect carbs, says Naulleau. “Too many people eat a salad with chicken, which is not enough. These days, carbs are considered poison, but depriving yourself of them results in sugar cravings in the afternoon. So adding rice, couscous, quinoa or pasta will do no harm if it means that you feel more full.”

That’s not to mention coffee, which isn’t poison either. Several studies show the benefit of drinking coffee every day. “Since it’s stimulating, I often recommend 2 to 3 coffees per day. But be careful what you add to it, because that’s often what makes it less healthy!”

A little boost
For sustained energy and greater endurance, Energex effervescent powder by Adrien Gagnon can be a very good option. Many natural flavours are available. Just empty the contents of a tube into your water bottle.