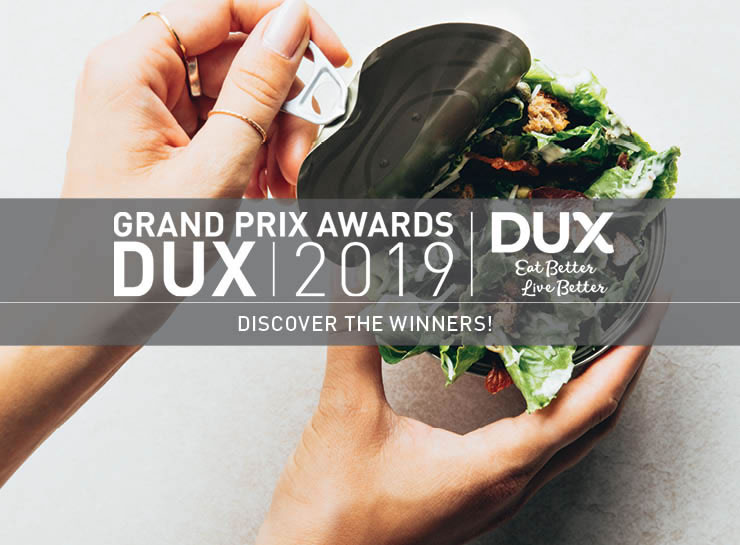 Wednesday night, at Marché Bonsecours, took place the DUX Grands Prix Awards 2019, a major annual celebration of the food industry! The winning candidates followed one another on stage, to the rhythm of the dynamic animation of Isabelle Racicot and the touching testimonies of the recipients. The DUX Grands Prix Awards reward initiatives that improve the food offer to help consumers eat better, live better. Nearly 500 people gathered at the gala to cheer the efforts of the candidates.

An industry that is blooming

The event, supported by the Ministry of Agriculture, Fisheries and Food, and presented by La Coop fédérée, highlighted projects, communication tools, processed products and quality agricultural practices that answers the growing needs of consumers. In a video address presented at the event, Minister André Lamontagne noted that “our lifestyles illustrate the importance of highlighting the nutritional quality of foods and the best practices of the companies that prepare them. ” His department has made it one of the objectives of the 2018-2025 bio-food policy, which is precisely to improve the nutritional value of processed foods in Quebec. Mr. Lamontagne spoke enthusiastically to the people gathered at the gala: “You compete for ideas and projects that meet the needs of consumers. I’m proud to associate myself with this movement celebrating the creativity and perseverance of a blooming industry. ”

Gathered in a collective movement

Lyne Gosselin, President and Co-Founder of Edikom and DUX, continues to be enthusiastic about the ideas generated by the industry in which she evolves, even after seven editions of the DUX Grands Prix Awards. For her, the strength of this sector lies in this deep conviction that the union of different currents inevitably leads to a richer food offer. She wants to start a discussion allowing to rally all the actors of the sector in a large movement. “In a world of mistrust of our industry, DUX has more than ever the strength and credibility to create a bridge between the agri-food industry and the consumer. To do this, Lyne Gosselin is eager to observe a transformation in the discourse on processed foods. “We must stop generalizing, we must work together to maintain a discourse that goes hand in hand with the needs and reality of the consumer! Let’s be partners! ”

The DUX Grands Prix Awards 2019 were held under the honorary presidency of Bruny Surin, Olympic champion and speaker, who was thrilled by his experience! For Mr. Surin, “it is really invigorating to see all the players in the industry who are committed to making the consumer move towards a better diet.” Following the example of Lyne Gosselin, he had these good words for the participants: “You have to constantly move forward, for when everyone looks in the same direction, this movement will turn into an accomplished mission”.

Raised by a Canadian Farmer Animal Care Program, by Chicken Farmers of Canada

Improvement, through the use of technology, of the baking quality of cereals, by Moulins de Soulanges

Ready-to-eat for people who have difficulty eating, chewing or swallowing food, by Prophagia Inc.

Every year, the DUX Grands Prix Awards showcases the leadership of agri-food companies, NPOs, institutions and non-food business companies who have innovated to help improve the population’s diet. At the DUX Gala, more than 25 awards are given in three main categories: Products, Communications and Projects. The DUX Grands Prix Awards is the first initiative launched by DUX Eat better, Live better in 2011. Since then, more than 120 industry leaders have been rewarded and have encouraged others to place health at the heart of their development and projects.

DUX, latin for leader, unites the corporate world and the consumers towards a common socio-economic goal: improving the food offer and eating habits of the population. This movement acts as a catalyst for initiatives and trends modifying both the commercial offer and the population’s habits. DUX’s vision is to offer access to quality processed foods and accurate information to the population, and equipped them to make healthy, tasteful and useful choices.